Backstage At The Metaverse: Part One | A Lack of Experience

What IS it, actually?

While GameBench is entirely concerned with user experience and the impacts of performance – primarily but not exclusively in gaming – we’ve abstained until now from joining the diverse, shrill and still bewildering debate about the metaverse.

Clearly UX, which has, remarkably, been almost entirely AWOL from the discourse to date, will be the make or break here. So it’s strange, even alarming, that the “if we build it, they will come” assumptions have been rife. Time to open up this line of enquiry, and to that end, this is the first in a short series of Performance IQ releases that aims to redress the balance. 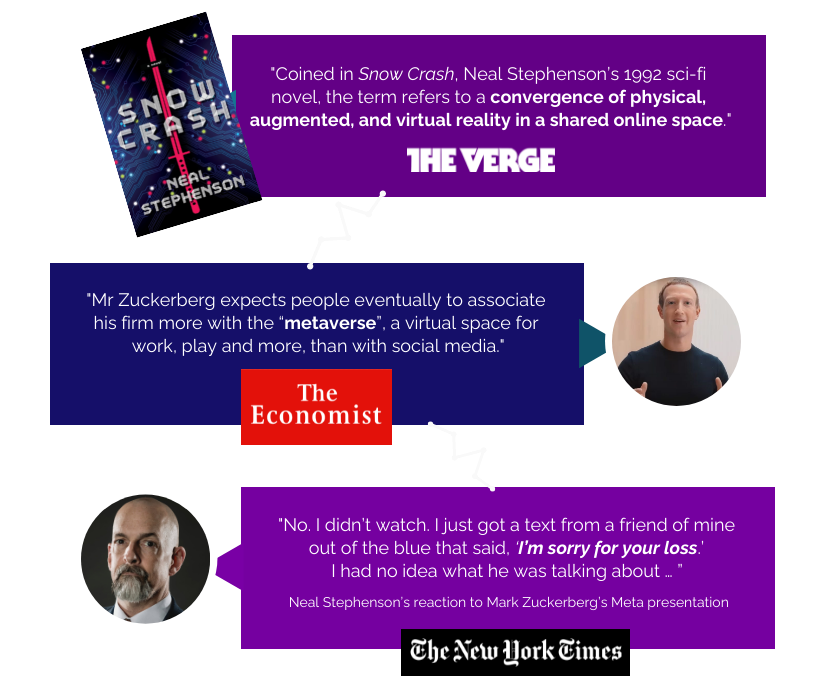 The first response from any UX professional to the metaverse would be, “When we know what it is, we can talk about the customer experience that’s implied, and from there we can go into the user experience.”

But perhaps, in this case, we should be looking through the other end of the telescope. Surely, in fact, the entire conversation should start with the user value that the metaverse represents and could deliver. To date, the assumption seems to be that the nature of the customer experience is already established, and the metaverse will just deliver a lot more of that, to a lot more people, at scale. Meta is totally committed. Epic and Nvidia too. So what’s not to like?

The potential of what we might call the “secondary” metaverse-enabling technologies – the ever-present blockchain, crypto, and NFTs are cases in point – that is so frequently referenced is intriguing. No wonder more and more are searching how to make money with NFTs. Some investors are clearly fascinated, and virtual land and artworks are scuffled over, with plenty of associated media coverage.

These developments in themselves, however, still tell us little or nothing about why the experience might be satisfying for more than a few users. As long as the customer experience of a cluster of supposedly revolutionary services remains unchallenged and unexplored, the metaverse remains a massive sandwich of declared opportunity. But lacking a filling.

The dynamics that concern us are emerging from what is still, despite its apparent familiarity, a very new, networked modality of human experience. This took flight into cyberspace in the quarter-century since the arrival of the World Wide Web, massively extended and deepened its cultural and commercial range and penetration with the now-universal smartphone, and has more recently come back to earth, already profoundly altered, and further extended by the promises of Artificial Intelligence and Machine Learning, with the still-embryonic Internet of Things.

In fact, when we speak of the convergence of the physical and the digital – a common and central feature of the metaverse discourse – we are invariably referring to phenomena that depend entirely upon the continuing growth and ubiquity of network penetration and computing. That understood we come to recognise that, highly transformative though the promise of the metaverse may be, this will be far from a revolutionary big bang, but a continuous evolution, one that will mostly proceed along already familiar technological and behavioural paths and patterns.

Wherever and however we choose to focus, this narrative has to date been, and will broadly continue to be, most simply and productively framed in terms of parallel and intimately linked developments in connectedness and intelligence. How these two tracks extend forward and outward while feeding off each other’s innovations and evolutions, will determine the infrastructure that will underpin the new experiences we need to understand and articulate.

The possible. And the valuable.

We tend, still, after all this time, to get caught up mistaking the excitement for the technologically possible, with the reality of the commercially valuable. It’s the latter – what customers, consumers … human beings! – are willing to invest time, attention and money into, that takes a promising invention and turns it into a true innovation. This is what actually drives disruption, and it’s also what makes opportunities successfully investable.

Today, we have well over a quarter-century of deep, diverse, and worldwide evidence as to what works, what doesn’t, and (mostly) how and why when it comes to developing and taking to market new digital experiences. We also have most, albeit not all, of the critical engineering building blocks already in hand and well understood. So what’s possible, and what’s valuable, can from here, and with unprecedented confidence, be considered together.

Getting real about the virtual

Following on the heels of all the previous hype cycles, we now have the metaverse. No need here to quote all of the many vocal and influential proponents of this new world. Suffice it to say for now, that many of them come out of gaming and social media. Some have the luxury of giant user bases, benefitting from massive network effects. Most of these have a lot of money to spend, not needing to worry, at least in the short- to mid-term, as to whether those investments produce returns.

Perhaps because of these enormous budgets, we can get easily excited and swept up in the “prestalgia”. And yet, looking back over the enormous changes in the way the world lives, works, and plays since the arrival of the World Wide Web in the mid-90s, there now exist, perhaps for the first time, pragmatic foundations for insight and guidance.

Every disruptive new technology that makes it to the market represents a significant and widespread behavioural change. To reiterate, disruption is rooted in changes in how we live, work, and play. The Web, the smartphone, Google, Apple, Amazon, Facebook, WeChat, Uber, Netflix, Spotify, and the rest all reflect, above all, profoundly new modalities.

So in trying to make sense of the metaverse, while technological feasibility – the possible – is of course critical, it’s equally (we would argue even more) critical to ask, based on everything we’ve learned to date, just how our behaviours might change, how that might change the ways we live and … well … as a real human being, just how that might feel. Where, in fact, is the value?

Part Two of “Backstage At The Metaverse” will hit your inboxes in two weeks.